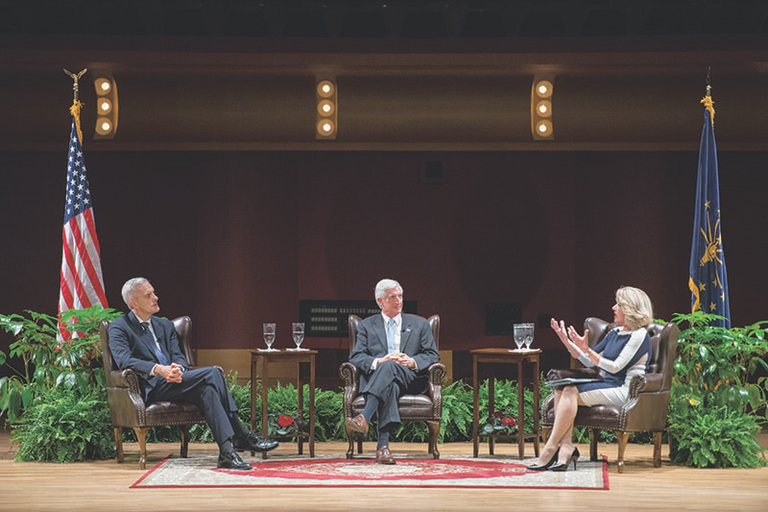 Views from the West Wing

Two former White House chiefs of staff were the featured speakers for the Notre Dame Forum, titled “Going Global: Exploring the Challenges and Opportunities of Globalism.” Denis McDonough, chief of staff for President Barack Obama, and Andrew Card, who served President George W. Bush, spoke to an audience of more than 1,100 on foreign relations, as well as the challenges of overseeing the schedule, vision, and staff of the most powerful person in the world.

NCAA President Mark Emmert appointed Notre Dame President Rev. John I. Jenkins, C.S.C., to the Commission on College Basketball. The 14-member body, chaired by former Secretary of State Condoleezza Rice, examined critical aspects of Division I men’s basketball in the wake of FBI investigations into individuals associated with the sport. The commission’s recommendations were released in April and included elimination of the one-and-done rule, which Father Jenkins characterized as an “educational sham.” 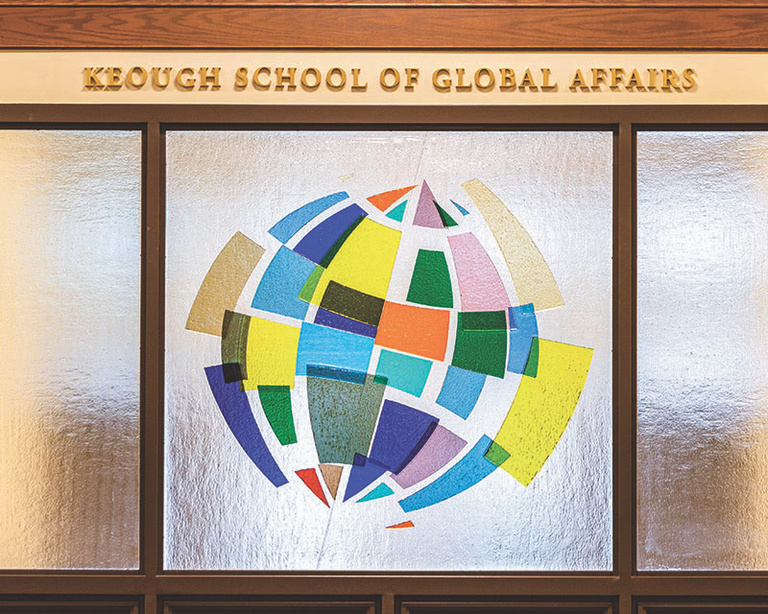 Notre Dame’s Outreach to the World

The Donald R. Keough School of Global Affairs, Notre Dame’s first new school or college in nearly a century, enrolled its first students. Housed in the newly completed Jenkins Hall, the school enrolled 38 students in its master of global affairs program. The students hail from 22 countries and bring with them extensive experience in international development, education, peace building, environmental conservation, human rights, humanitarian assistance, journalism, and other fields. They engage in a curriculum that offers foundational courses in economics and integral human development and choose a concentration in international development, international peace studies, or global affairs. 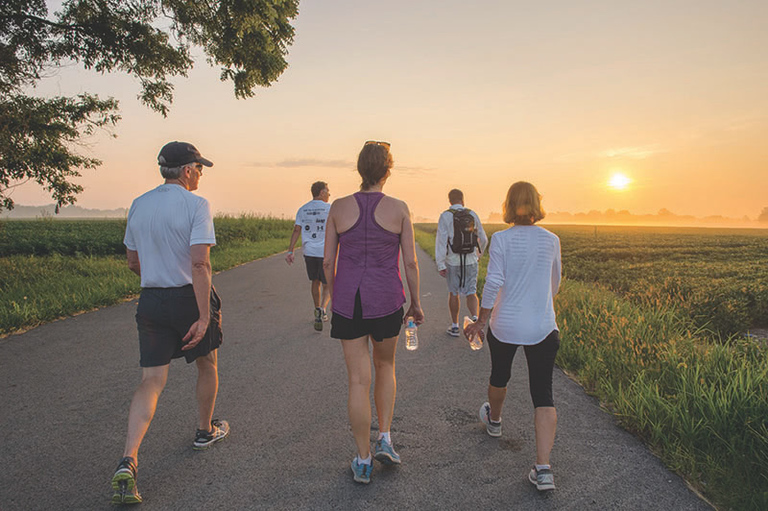 300 Miles in the Footsteps of our Founder

Notre Dame commemorated its 175th anniversary with a variety of events, highlighted by the Notre Dame Trail, a 300-mile reenactment of the journey from Vincennes, Indiana, to South Bend by the University’s founder, Rev. Edward F. Sorin, C.S.C., and Holy Cross Brothers in November 1842. Other anniversary events included multiple presentations of a one-man play titled “Sorin: A Notre Dame Story” and a 3D video of the University’s history that was projected onto the Main Building. 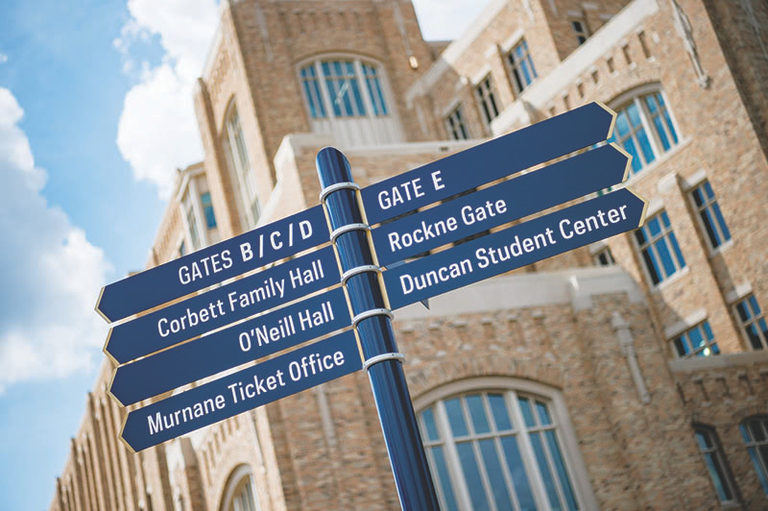 The largest construction project in the University’s history came to a conclusion with the opening of three buildings surrounding Notre Dame Stadium— Corbett Family Hall, Duncan Student Center, and O’Neill Hall. The buildings house world-class teaching, research, performance, office, multimedia, and student life space. The project also provided new premium seating in the football stadium, as well as a video board and improvements to cellular and WiFi service, concessions, and concourses. 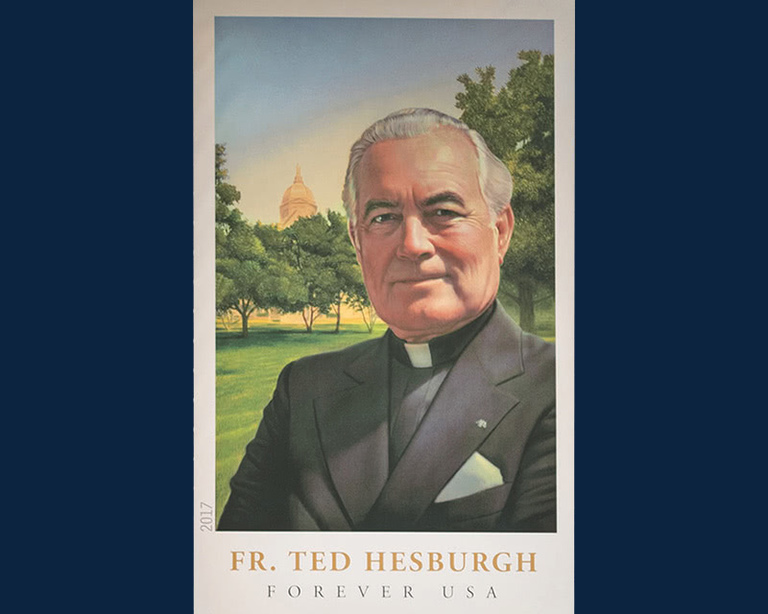 The U.S. Postal Service celebrated the legendary career of the late Rev. Theodore M. Hesburgh, C.S.C., Notre Dame’s president from 1952 to 1987, with the on-campus unveiling of a 49-cent Forever stamp in his honor. The event featured remarks from Notre Dame alumna and former Secretary of State Condoleezza Rice, Postmaster General and Chief Executive Officer of the U.S. Postal Service Megan Brennan, and Notre Dame’s president, Rev. John I. Jenkins, C.S.C. 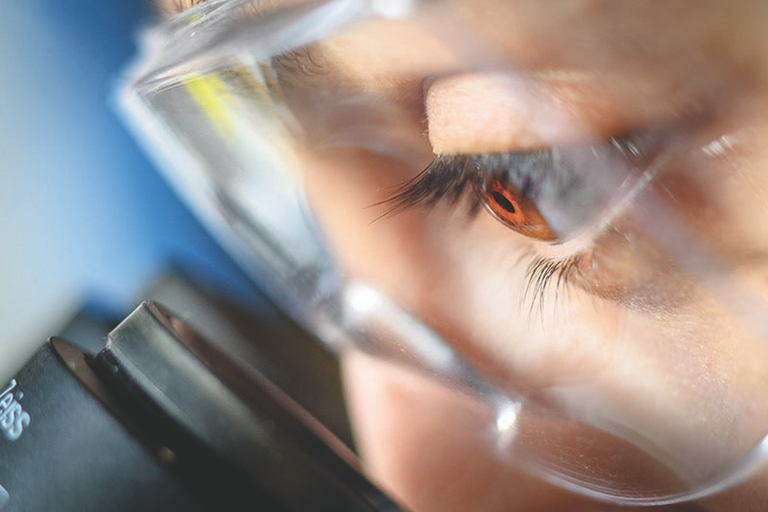 Faculty across the campus received $141.6 million in research awards in fiscal 2018, surpassing the University’s previous record of $138.1 million awarded in fiscal 2017. The amount is part of a trend that has led to a 75 percent increase in external research funding awarded to Notre Dame compared to 10 years ago. Nearly 63 percent of the awards came from federal funding, 24 percent from foundation and other sponsor funding, and about 13 percent from industry.

In collaboration with South Bend, Elkhart, and numerous community organizations and businesses, the University hosted its first IDEA Week to feature strides being made in innovation and entrepreneurship in the region. Featured events included talks by Zappos CEO Tony Hsieh and FUBU founder and Shark Tank star Daymond John, and a concert by recording artists The Chainsmokers. 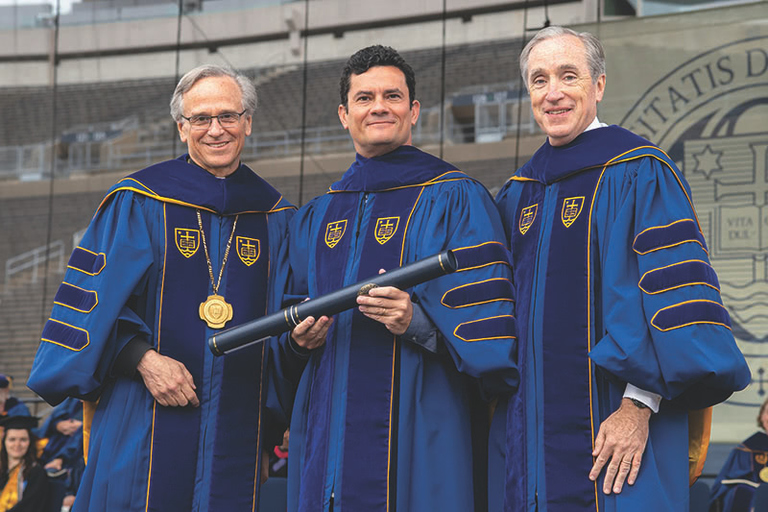 Sérgio Moro, the Brazilian judge who has led the fight against corruption in his country, received an honorary degree and was the principal speaker at Notre Dame’s 173rd University Commencement Ceremony. Earlier in the year, the University presented the Notre Dame Award to Moro at a ceremony in São Paulo. The Laetare Medal, Notre Dame’s highest honor, was conferred during the commencement ceremony on Sister Norma Pimentel, a champion of immigrants and the executive director of Catholic Charities of the Rio Grande Valley. 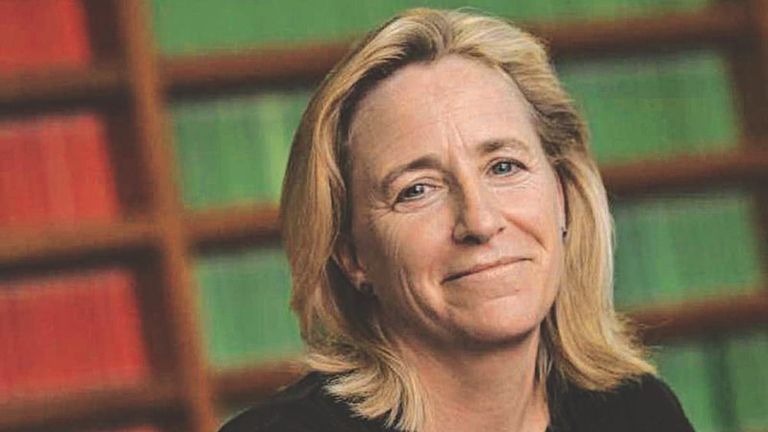 NEH Fellowships Top Harvard, All Others

Notre Dame political scientist Susan Collins was awarded a 2018 fellowship from the National Endowment for the Humanities (NEH), extending the University’s record success with the NEH. Since 1999, faculty in the College of Arts and Letters have won 62 NEH fellowships—more than any other university in the country. Harvard University, with 31, has the second highest number of fellowships for the same time period. 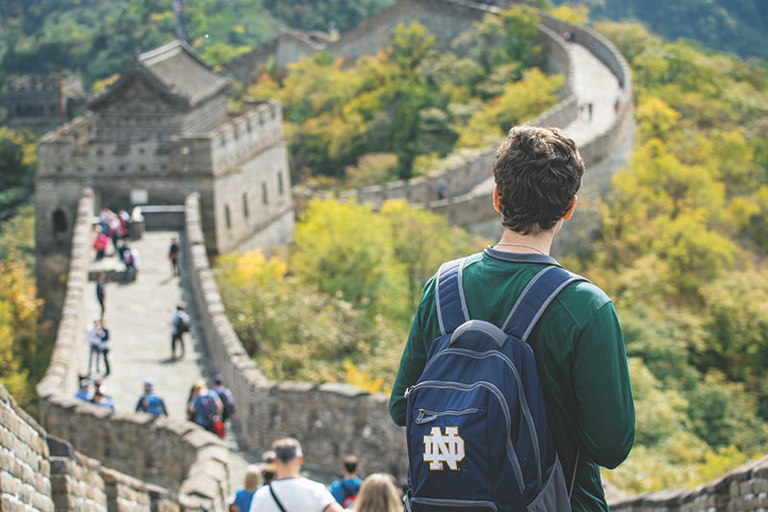 Second in the Nation for Study Abroad 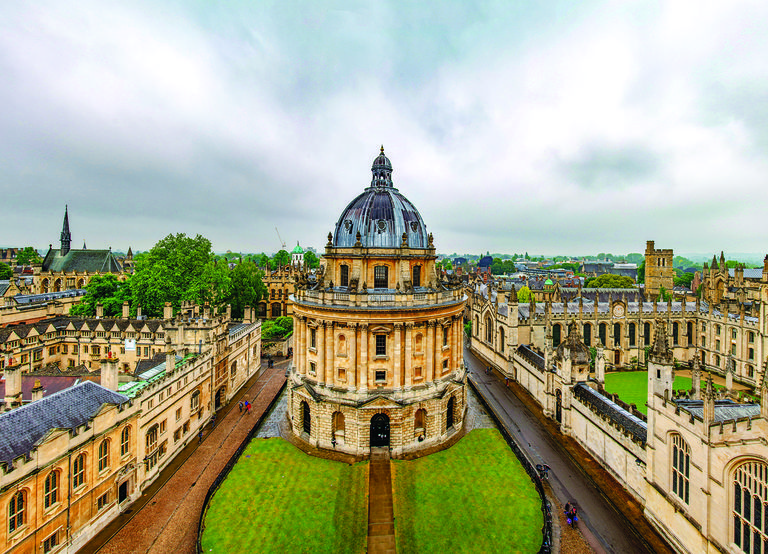 Father Jenkins at Oxford: 800 Years of Getting It Right

Rev. John I. Jenkins, C.S.C., Notre Dame’s president, was invited back to Oxford University, where he earned his doctoral degree in philosophy, to deliver a lecture titled “The Idea of a University Today.” He said, in part: “It is important to remind ourselves that universities are among the most enduring of humankind’s institutions. Oxford was founded roughly 800 years ago and continues to thrive today.... It is becoming more or less commonplace to hear that universities like Oxford and Notre Dame are soon to be disrupted by digital technology that, in its various manifestations, will create more efficient, less expensive, and more creative institutions of learning.... It would be a mistake, I think, for those of us in traditional universities to smugly dismiss this suggestion. Digital technology has changed and will continue to change the ways in which we interact with one another, learn, gather information, form communities, and do business.... Could the disruption be even more radical? Could universities be replaced by online communities in which instruction is exclusively delivered digitally, tests are taken and papers submitted online, assessment made at a distance?... I count myself a skeptic about these prophecies of radical disruption.” 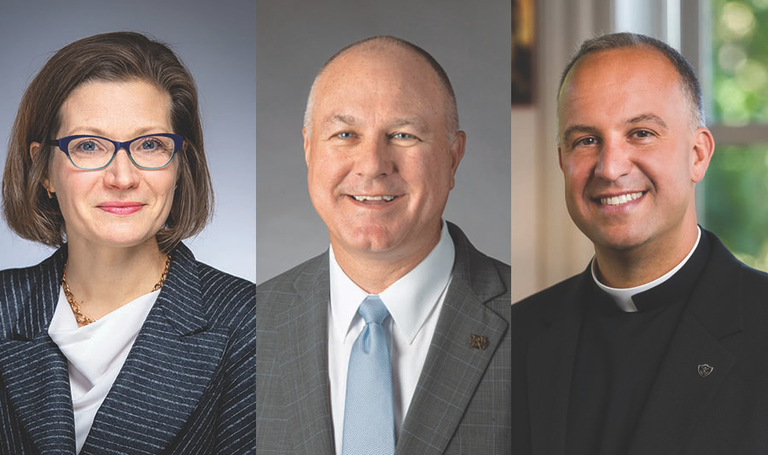 Twenty-nine Notre Dame students and recent alumni were awarded Fulbright U.S. Student Program grants, second among all research institutions in the U.S., according to the U.S. Department of State’s Bureau of Educational and Cultural Affairs. Established in 1964, The Fulbright Program is the U.S. government’s flagship international educational exchange program, providing more than 380,000 students with the opportunity to exchange ideas and contribute to solutions to shared international concerns based on academic merit and leadership potential. This is the fourth consecutive year that Notre Dame has been recognized as a top Fulbright producer. 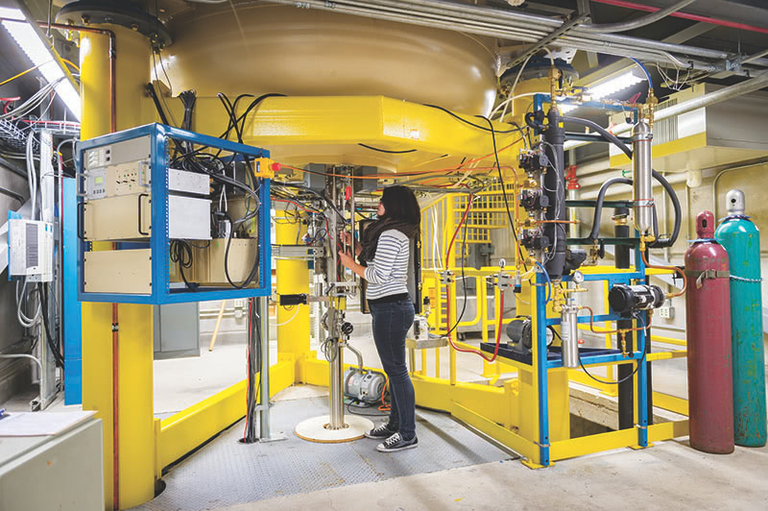 Faculty, staff, and students affiliated with the Nuclear Science Laboratory celebrated its 80th anniversary. Originally called the Nuclear Structure Laboratory, it created an “atom smasher” that contributed to work on the Manhattan Project. The lab now includes three accelerators that are used to conduct research into nuclear astrophysics, nuclear structure, the half-life of radioactive particles, and environmental contaminants. Faculty also have installed a low-energy accelerator in an abandoned gold mine in South Dakota. 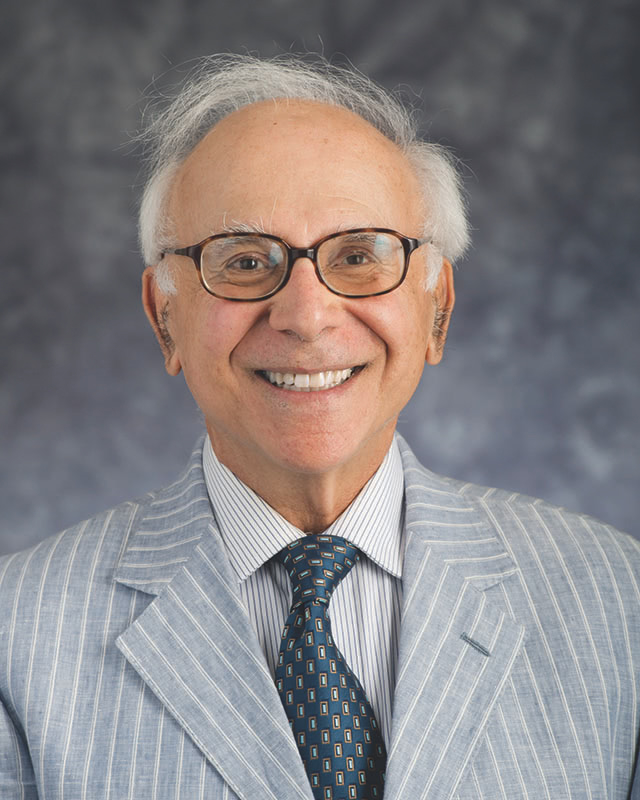 Audi Elected to American Academy of Arts and Sciences